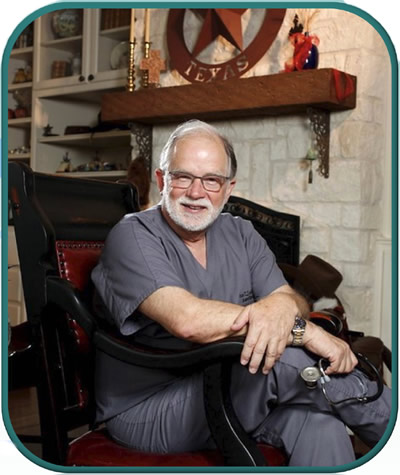 Asa C. Lockhart MD, MBA was born in Lindale, Texas to Vada and Roy Lockhart. His father was a rose grower, and they moved to Tyler when Asa was a young boy. After a devastating year for the rose business, his dad started a nursery business, which influenced Asa to become successful and patient. He said he did not want to spend the rest of his life watering thousands of buckets of plants one at a time! As a result of his knowledge gained at the nursery, he was hired and regularly assigned to the garden center at K-Mart where he developed an appreciation for working with the public. He was also a counselor at Pine Cove Camp for one summer where he met an academic physician who would later play an instrumental role in his career. He attended Tyler public schools and graduated with honors from Robert E. Lee High School with a full scholarship to Texas A & M, but another unexpected opportunity arose, and he declined the scholarship. He was accepted into the Coast Guard Academy but that was not meant to be. During his physical the doctor discovered a pilonidal cyst that disqualified him from the Coast Guard just before classes were to begin, but not the draft.

Asa enrolled at Tyler Junior College majoring in biology and chemistry. In the second year, he drove TJC President Jenkins in the homecoming parade. Dr. Jenkins asked where he was going after leaving TJC, and Asa responded that he did not know but joked that Texas A & M would not be too receptive. Dr. Jenkins said he had good contacts in the biology department at North Texas State University in Denton, Texas and would recommend Asa for a lab assistant position. Asa was accepted at NTSU and was offered the lab assistant job. In his third year of college and only second semester at NTSU, Asa’s advisors suggested that he apply to medical school to become familiar with the process, so he applied to all of the Texas medical schools. Much to his surprise as a result of the relationship from Pine Cove, he had the choice of the last spot at the new UT Health Science Center Medical School Houston or the first spot for the following year at UT Southwestern. Since he was paying his own way, it was a short decision. As it turned out, he was assigned to spend his first two years at UT Southwestern. While at NTSU, he was sent to a leadership conference in Louisiana, which later led to an invitation to attend the National Prayer Breakfast in Washington D.C.

Soon after Asa moved to Houston, he joined the First Baptist Church where he met Joy Kirby, his soon to be wife. On their tenth date, he asked her to marry him. Asa says that is the only fast thing he ever did. Joy should have known that Asa was interested in politics since on their second date they attended Dolph Briscoe’s Inauguration and Dinner. They wanted to get married in the spring, but couples had to be married for a year before the spouse could go on the international externships so they set their wedding date for September. Joy was going back to Oklahoma to work on her master’s degree, and Asa was assigned to the Gaza Strip for a surgical externship as a fourth-year medical student. Two weeks after his return, they married. Asa quipped that he married Joy because she had a color television, a job, and a 1968 SS 396 Chevelle Super Sport, and Joy joked that since Asa lacked three months before graduating from medical school, she put him through school. Asa graduated from UTMSH in December of 1973.

After returning from their honeymoon in Acapulco, they tightened up loose ends and prepared to move to Atlanta, Georgia where Asa began his internship at Emory University and Grady Memorial Hospital. When they got to Atlanta, the apartment complex Asa had rented on his return from Gaza was in bankruptcy. They moved into a motel and began looking for a place to live. It was difficult since there was a hard rain for days. They finally found a place that was quite a distance from Grady, and after a few months of grueling traffic, they moved again into an apartment closer to the hospital. During Asa’s residency with long exhausting hours, Joy became pregnant in 1975, and had a little red headed girl, Heather Lynne. Thirteen months later they had another little red headed girl that they named Lesley Michelle. The recovery room nurses did a double take when Joy showed up with another red head. Asa completed his Emory University Medical School Internship and Residency in December of 1976. Asa was active in the Georgia Society of Anesthesiologists and was tasked with organizing a regional resident’s conference.

Asa and Joy attended their first TSA meeting in Ft. Worth. When they walked in the room, it was full and they must have looked lost. Presley Chalmers, Fred Thomas, Eugene Slataper, all past TSA presidents, and their wives were sitting close to the door and had two seats left. Asa and Joy joined them, and that was the beginning of a long and dear friendship. They sat with them at every meeting until they were no longer active. They were genuinely great mentors. Asa has been in the TSA House of Delegates since 1981. He was the TSA Treasurer from 1987 to 1989 and became president in 1990. He also served on the Committee of Workman’s Comp. In 1994, at Asa’s suggestion, our TSAPAC was approved and created. He served as Chairman from 1994 to 1997. Asa was a representative to the ASA House of Delegates as an Alternate from 1981 to 1985 and as a Delegate from 1986 to present. Other committees that he served on were Practice Management (1999-2018), Information Management (2007-2010), and Future Models (2010-2016). In 1996, Asa enrolled in the University of Houston – Clear Lake’s Master of Business Administration for Physicians. After completing the program with honors, he realized how important it was for physicians to be able to speak the language of business. The ASA helped him realize his dream, and the Certificate in Business Administration was born. Its first class was in 2000, and Asa was the course director until 2018 when the ASA decided to abandon the program. Around 1200 physicians finished the course.

Asa was elected to the Texas Delegation to the AMA House of Delegates as an Alternate from 2000 to 2009 when he became a Delegate and still holds that position. He was Vice-Chair of the Texas Delegation from 2014-2018. He was elected to the AMA Council on Medical Services in 2014 and re-elected in 2018 and is currently a candidate for the AMA Board of Trustees. He has been a TexPAC representative from 1988-1992 and from 2018 to present. In the 80s, he and David Duffner, MD, recently murdered in his office, were Smith County TexPAC co-chairs, and they raised money for many people running for office. David held fundraisers for most of the GOP candidates, and Asa’s fundraisers were for most of the Democrats. Back then the same people attended fundraisers for both sides of the aisle. Asa’s most successful fundraiser was for Lloyd Bentsen, and Senator Bentsen asked him to be on his Committee of 50, which put him in a position to meet many politicians across the country. He was proud to represent anesthesia and global medical issues as he networked the political arena.

Other initiatives he has been involved in are the National Physicians Council for Health Care Policy; Vice Chair (2015-2018), Texas Institute of Health Care Quality and Efficiency; Subject Matter Expert (2013), Texas Surgical Quality Collaborative; Board of Directors (2011-2019), and representing ASA as one of the physician advisors in the creation of the joint ASA-Medical Group Management Association Anesthesia Cost Survey.

In 1998, Asa and Joy formed Golden Caduceus Consultants and have since worked with approximately 200 anesthesia groups in 40 states. Their goal is to empower them to improve their business proficiencies through strategic planning, negotiation skills, and awareness of future possibilities.

Joy is truly Asa’s partner. In medical school she would sit through some classes with Asa so that they would have time to go to El Chico on Wednesday night for the $1.99 Enchilada Dinner, and when on call, she took him warm homecooked meals. When he was Smith County Medical Society’s TexPAC chairman, Joy was the SCMS Alliance chairwoman. Until a few years ago she went on all of the GCC projects and attended every state and national medical meeting. Now her support is from their home office. Her change of heart came when she felt their grandchildren needed her support, and they were both happy that she could be supportive to the grandkids, their daughter, and son-in-law. Their children also sacrificed because of Asa’s long hours in the OR and their travel schedule. They were fortunate that they had two sets of grandparents that their girls loved. Its been a great journey and the best is yet to come.


Choose From Among 34 Hours Of Continuing Medical Education

This CME activity meets the formal CME requirements for the State of Texas annual medical license renewal, including:

Included in the above hours: