The Opioid Epidemic Worsens Amid the COVID-19 Pandemic

In October 2017, the United States Department of Health and Human Services acknowledged the public health emergency arising from the opioid crisis. Considerable public attention was subsequently focused on reversing harmful trends associated therewith. In early 2000, the widespread healthcare burden of the COVID-19 pandemic led to a shift of focus to the multitude of hospital workflows that were impacted. Consequently, attention to the opioid epidemic has waned. This lack of attention may give the impression that the epidemic of opioid overprescribing, misuse, addiction, and overdose has improved. However, the opioid crisis continues to represent a significant and complex public health problem in Texas and in the United States. Three indirect markers evidence the existence of an ongoing crisis: opioid prescribing rates, National Prescription Drug Take Back Day collection rates, and opioid overdose death rates. Anesthesiologists play a key role in raising awareness and encouraging evidence-based practice patterns to combat the crisis.

Historical Overview of the Opioid Crisis

The relationship between opioid overprescribing and opioid addiction is now well established. However, this relationship was aggressively refuted in the early 1990s by the pharmaceutical industry which was intent on increasing sales of opioid analgesics, namely Oxycontin. At the same time, the medical community, society, and governmental regulatory authorities also began promoting the increased use of opioids, based on claims of safety from widely propagated misinformation and “medical evidence” taken out of context of the original writers. Several widely quoted papers contributed to the belief that that opioids were “safe”. The Annals of Internal Medicine published an editorial in 1990 challenging the standards for evaluation and treatment of pain in patients for the preceding 20 years, stating that it had been widely publicized for a decade “that therapeutic use of opiate analgesics rarely results in addiction”.1 This was one among hundreds of publications during the 1990s making the same broad and inaccurate claims based upon the findings of a single paragraph letter to the editor from 1980, which stated that opioid addiction was rare in patients without opioid use disorder after receiving opioids during a hospitalization.2

In 2000, the Veteran’s Administration authored a resource manual entitled “Pain as the 5th Vital Sign Toolkit” to promote pain assessment and treatment, using a scale of 0 (no pain) to 10 (worst imaginable pain) to assess patients and intervene as needed. The Joint Commission subsequently adopted these recommendations and emphasized the importance of assessment and treatment of pain. Although these well-meaning initiatives were intended provide better assessment and treatment of patients experiencing pain, pharmaceutical companies began aggressively promoting the primary use of opioids to treat pain with paid symposiums for physicians throughout the country, while minimizing and misrepresenting the addictive potential of prescription opioids. Although recent legal actions against multiple entities involved in the production, distribution, promotion, and sale of Oxycontin have resulted in billions of dollars in judgments, the damage caused by their actions remains.

To complicate the issue further, prescription opioid usage does not necessarily correlate with prescribing. For example, patients with chronic pain may routinely use all pills prescribed. However, post-operative patients may have up to half or even more of the prescription left over after the resolution of their pain, despite evidence-based prescribing practices (i.e., minimizing the dose and number of tablets prescribed at hospital discharge).6 Unused prescription opioid pills create the excess available for overuse, misuse, and diversion in the community. This ultimately leads to an increase in patients seeking medical attention for adverse health effects (i.e., nonfatal overdose and substance use disorder) or dying by overdose.

In 2010, the Drug Enforcement Administration (DEA) recognized the potential for community harm from unused prescription drugs (primarily opioids) and instituted the National Prescription Drug Take Back Day (NPTD). Since that time, the DEA has collected approximately 595 tons of leftover prescription medications in Texas and 7,634 tons in the US, divided over 21 bi-annual events (Figure 2).7 The average weight collected progressively increased from 2010-2016 and has remained relatively stable or slightly decreased since that time. This may be due to greater public awareness and broader participation in later events rather than an increase in excess opioids. Regardless of the reason for increased collections in the past 5 years, prescription drug excess remains high even though legitimate opioid prescribing by physicians has substantially decreased over the past 10 years. It is important to note that NPTD is not restricted to opioid collection so totals may include other controlled substances. However, following overall collection trends remains a valuable indicator of whether prescription drug excess is improving over time.

The most detrimental factor indicative of an ongoing epidemic is the continued uptrend in fatal opioid overdoses. Data from the Centers for Diseases Control and Prevention describes “Three Waves of Opioid Overdose Death”.8 The first wave began when prescribing rates increased after 1992, leading to a rise in overdose deaths involving prescription opioids. As public awareness increased and the supply of leftover prescription opioids available for diversion decreased, street value of prescription opioids increased. This contributed to the second wave of opioid overdose in 2010 with the rise in overdose deaths involving the cheaper alternative: heroin. By 2012, overall opioid prescribing rates continued declining and the supply of cheap, high potency, illicit synthetic opioids continued increasing. The third wave in 2013 has resulted primarily from fentanyl and carfentanil-involved overdoses (both alone and in combination with heroin, counterfeit pills, and cocaine), which continue to be the primary drivers of opioid overdose through the present (Figure 3).9

Though opioid overprescribing may not be directly responsible for the most recent waves of opioid overdose deaths, circumstances over the past 2 decades have led to a shift in the “gateway” to opioid misuse. In the 1960’s, more than 80% of new heroin initiates began with heroin, whereas after 2000, up to 86% of new heroin initiates reported use of prescription opioids as the gateway.10 Deaths are now increasingly related to illicitly manufactured synthetic opioids (counterfeit pills), which may have inconsistent concentrations of the imitation drug, along with fentanyl or carfentanil additives, although a substantial number of deaths continue to involve both prescribed opioids and heroin. Thus, prescription opioid excess creates the environment favorable for the initial exposure that later transitions into riskier use and death from heroin and illicit synthetic opioids.

The current breadth of medical evidence supports the Joint Commission’s recommendations to regularly assess and treat pain in hospitalized patients.11 However, the opioid epidemic has led to an increasing awareness that treating pain is not synonymous with prescribing opioids and that vigilance in prescribing is essential. Perioperative communication is especially important to educate patients regarding expectations for pain control and to correct pervasive misinformation regarding opioid efficacy and safety. Patients should understand that the treatment goal is not to eliminate pain, which may be the expectation prior to perioperative education. Pain is a normal response to illness or injury and serves as a protection mechanism while the body heals. Trying to eliminate pain often requires excessive medications with harmful side effects that are detrimental to recovery. The treatment goal is to reduce pain to a level that allows function with ambulation, respiratory care, and other light activity that are all beneficial for recovery.

Multimodal pain management strategies that aggressively utilize nonpharmacologic interventions and non-opioid medications often provide more optimal analgesia than opioids while concurrently reducing opioid requirement at discharge while still maintaining equivalent patient satisfaction.11 Elements of a holistic pain management strategy are summarized in Table 1. Non-pharmacologic interventions have the fewest side effects and should be maximized. Non-opioid medications are the next safest interventions and should be escalated in order of efficacy and safety profile. Acetaminophen and ibuprofen should be given on a schedule if there are no contraindications for their use. Other non-opioid medications should be given for targeted effects (rather than indiscriminately). Physicians are required to review the Texas Prescription Drug Monitoring Program report prior to prescribing opioids, which also helps facilitate care if the patient is already receiving opioids from outpatient prescribers. Opioids should be given for refractory pain after maximizing all non-opioid therapies and their use should be limited to the minimum dose and duration following hospital discharge (ideally five days or fewer).6

Utilizing a holistic approach to pain management remains essential to optimal patient care, especially as hospitals resume higher than normal operative schedules to make up for backlogs that developed when the COVID-19 pandemic was at its peak. Anesthesiologists must not become complacent, but instead must continue to raise awareness and advocate for evidence-based pain management and opioid safety in hospitalized patients. ♦

Figure 1. Opioid Prescriptions Dispensed per Capita in Milligram Morphine Equivalents (MME) from 1992 through 2000 for the United States and Texas. Data source for 1992, 2000, 2002: The IQVIA Institute for Human Data Science.3 Data source for 2011-2020: The American Medical Association for MME dispensed statistics and the United States Census Bureau for population statistics.4,5 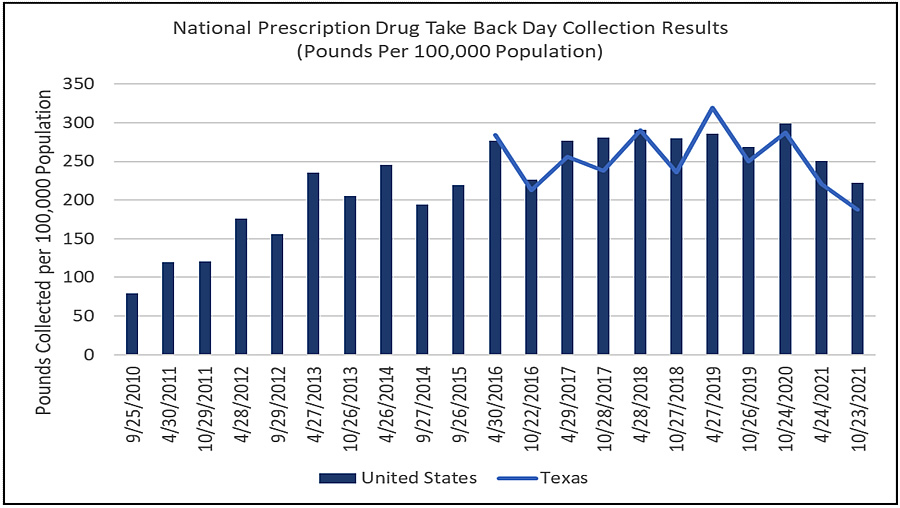 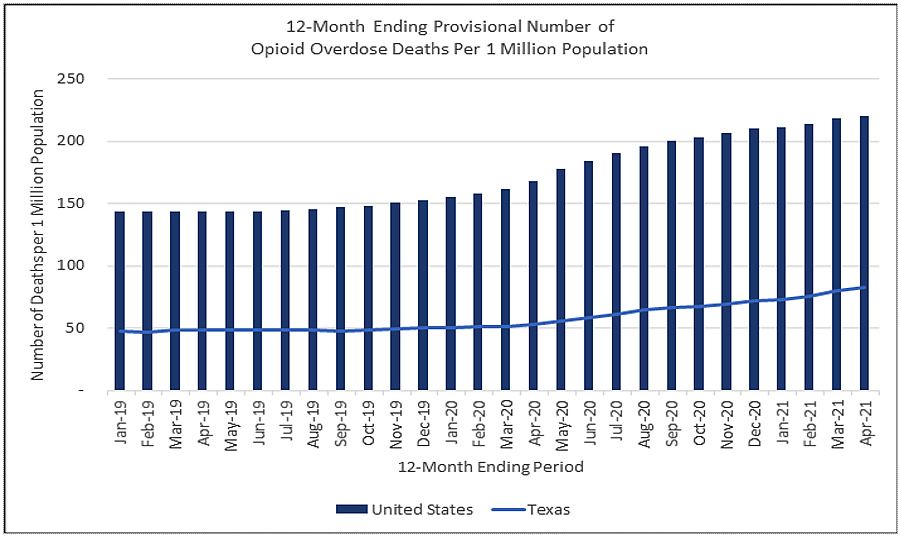 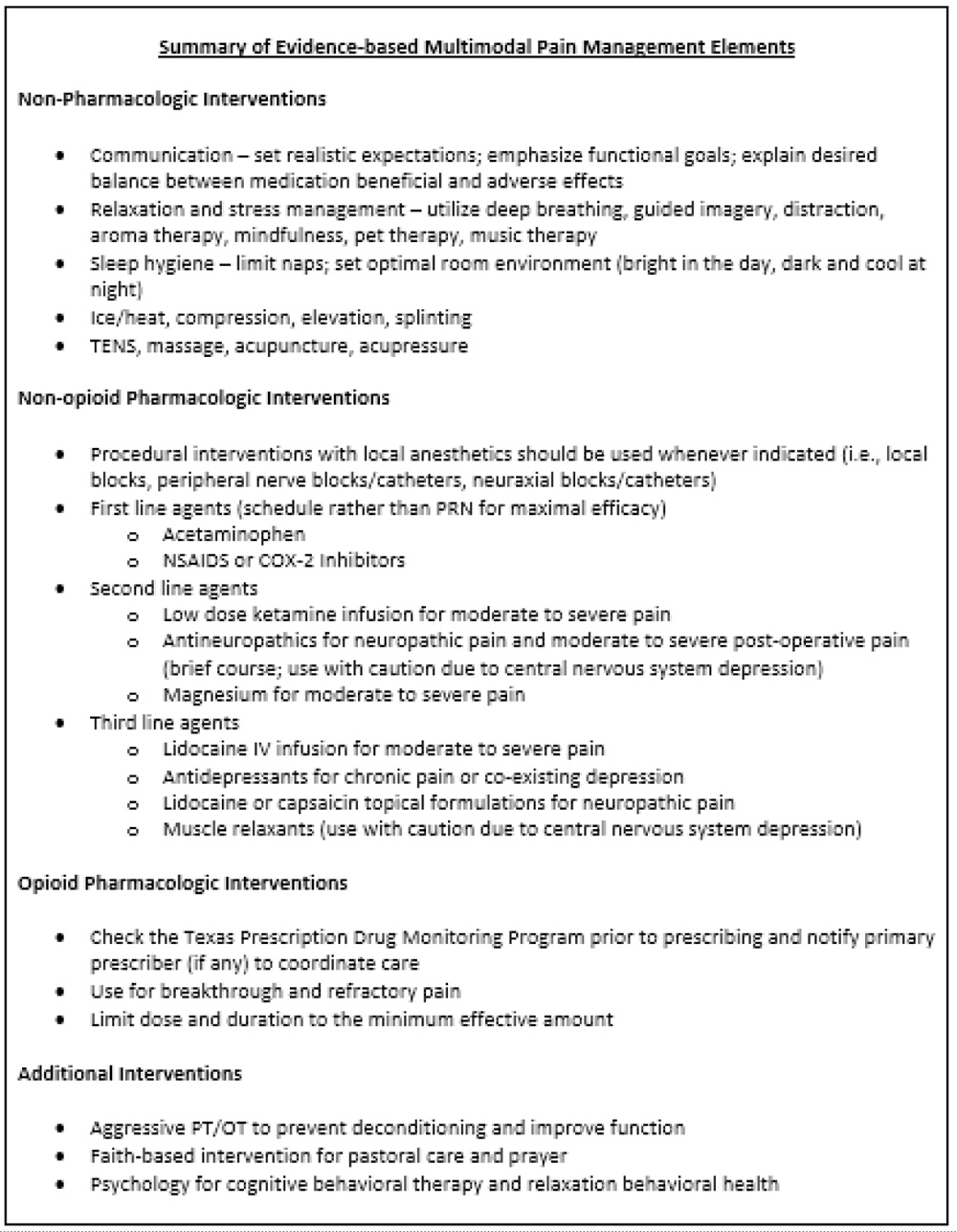